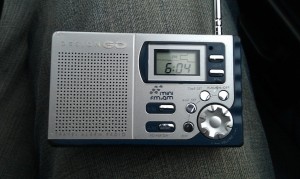 Bad news. I woke up this morning to a nasty crackling sound instead of Jack FM. And from this we must conclude that my much-loved mini travel radio is dying.

For sure, the casing is held on with blu-tak (or to put it another way, the front fell off) - but it's soldiered on quite well for at least six years now (I think it was one of the last things the late and much-lamented Gadget Shop sold). It doesn't owe me much, but I fear I won't be able to replace it with anything half as good. The only equivalents I can find on the market are, inevitably, DAB compatible. Which means they won't last a month on a pair of AAA batteries (more like a few hours on four AAs), they're bigger, and they really want mains power - which makes carrying them down to the kitchen to catch the end of a track problematic.

This one also has some really neat touches - when you put new batteries in, the alarm is off-by-default and set to 7am (not midnight!). You also have to press two buttons in sequence to make the noise stop when it comes on via the alarm - a great feature for avoiding turning it off and going back to sleep, and also excellent for annoying the heck out of your housemates when you forget to turn the alarm off before going on holiday.

I love new technology when it brings real benefits, but I'm not a fan of digital radio. My earliest experience of it was about four years ago, when they were running those "it doesn't crackle or hiss" adverts. Ironically, our digital radio broke up quite badly during several of them.

Sigh. Anyone out there able to cheer me up by pointing me at a brave/principled manufacturer of radio kit which is still making AM/FM analogue radios?