Today, I put my wallet through the washing machine. Needless to say, this was not intentional.

Let's start with the good news: despite being made of paper, the wallet itself looks as good as it did when it went in (which is not very, after three years' hard duty): 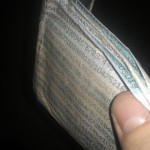 The £10 note is still very recognisable, if a bit crinkly.

The plastic cards varied widely in appearance after a good wash at 40. My UK driving licence takes the top prize for being completely undamaged, with Oxfordshire Libraries a close second (slightly bent, but barely noticeable). The rest weren't so well-built. My debit card became interestingly bubbly, and my credit cards all bent to the shape of the bit of washing machine they ended up wedged against. A bit of a bodge involving the iron and a towel has flattened most of them out again (and they do work - chip and PIN isn't fazed at all by a good wash), but I fear it's time to order replacements.