Sifting through the digital debris on my hard drive, I came across an old favourite from my university days. So now it can be told - the story of how I (with quite a lot of help from Andrew and Martin) wasted many hours of my precious youth on a joke wakeup calls service...

The place: Magdalen College, Oxford. The time: October, 2008. The setting: a party. The topic of conversation: my awful sense of humour and propensity for bad puns. Someone jokingly said to me "you could run a wakeup calls service with your joke of the day ... you could call it PUNctuality". And the name was so awesome, we actually sat down and built it.

Magdalen had (still has!) internal phones in every student's room. Calls within the university were (are!) free, and armed with this and a VOIP adapter purchased off eBay, we set about building the system.

We had one phone line, an ATA and a copy of Asterisk. The first problem we encountered is that Oxford University's dial tone is not the same as BT's, so we couldn't tell when our callee had picked up or hung up. We ended up throwing a 30 second chunk of (out-of-copyright) music before the calls to give people time to pick up before we played the joke

Our second problem was that we had just the one phone line. So having everyone request a call at 0730 wasn't going to fly - we'd have to stagger the calls at least 1 minute apart.

Armed with this and a GCI to make Asterisk make the call, I put together the world's simplest web interface in 400 lines of PHP/MySQL:

I obviously wasn't taking any chances on the legal side: 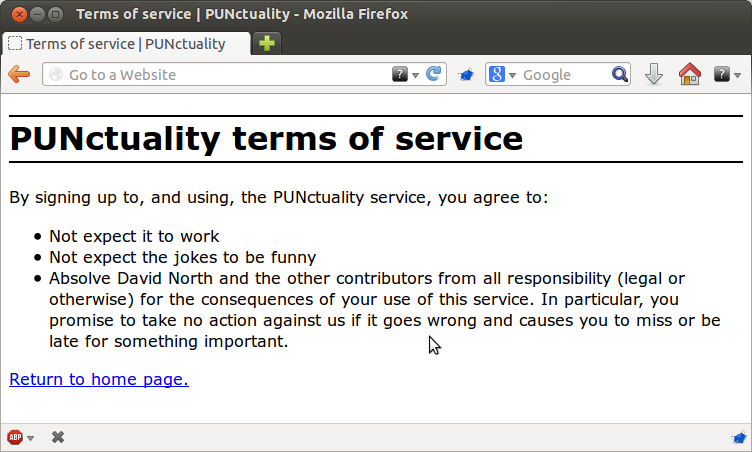 And, a mere term after the idea first came up, we'd made it a reality: 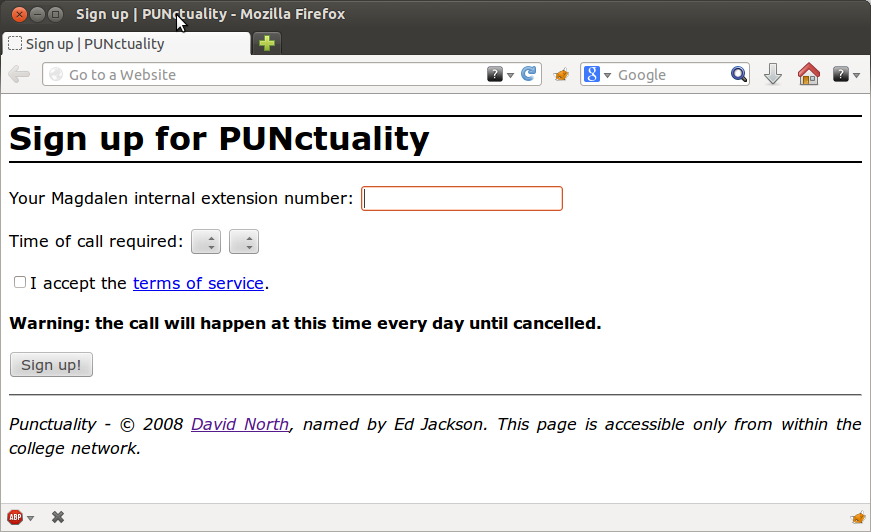 We had a launch party - complete with a USB big red button to make the phone ring with the first ever call. PUNctuality ran successfully for the whole of Hillary Term 2009, even waking up my parents in a college guest room one weekend. We had just one day of downtime caused by the ATA crashing. In the end, the reason I never brought it back for another term was mostly the sheer effort of coming up with a fresh joke every day. Andrew and Martin set it up so I could dial in on my mobile, enter a PIN and record the next day's joke, but even when your friends all collected the innards of their Christmas crackers for you, being funny on a daily basis isn't easy!