Having recently moved into a new flat, I found myself back on the market for an internet connection for the third time in as many years. There's no Virgin Media infrastructure in my street, which suits me fine as I wouldn't touch their services with a bargepole (you either love 'em or you hate 'em, and my personal experience has been less than stellar). So it came down to the trusty landline.

Fibre to the cabinet (BT Infinity and other such services) is available here, but good old-fashioned ADSL claimed it could deliver speeds of up to 11.5Mbps downstream. Since I live alone, and this is fast enough to stream Netflix in the maximum resolution my TV can display, it seemed worth a punt. Plain ADSL has undergone a big price collapse in recent years - the EE deal I got, paying the line rental up front and factoring in the £100 Amazon voucher I'll get after three months, works out to cost £2.50 per month. There's always a bit of a worry when buying such a service that there can hardly be a profit margin, never mind money to spend on customer service, but the reports online seemed largely positive.

I placed the order online on the day I moved in, and heard nothing for a week. I then eventually got a call to tell me that I'd mis-typed my bank details for direct debit during sign-up. I was impressed to find a Sunday shift manning the phones who could correct this, but less impressed when I chased three days later to be told that the fix hadn't happened. Things were eventually sorted and I got a text with my expected activation date. Then I got another text two days later telling me that date had slipped by four days. I wasn't amused, but I cut EE some slack since I suspect these dates are at least partly at the whim of BT Openreach, who ultimately own most of the infrastructure involved.

I was rather more impressed with the delivery of my router - the online tracking for it wasn't the best in the world, but they did automatically re-deliver on a Saturday after failing to find anyone in during the week. Of course, the fact that the BrightBox router is cleverly designed to fit through a letter box doesn't help when you live in a flat guarded by an entryphone system.

On my installation date, I got a text telling me my service was live. Sure enough, I found a dial tone on my line when I got home. I don't plan on using my landline much, but it is worth noting that EE throw in weekend calls with this deal, and that they provide caller ID as standard (BT's website suggests that they still have the cheek to charge for this in some circumstances - surely they've paid for the infrastructure involved by now and charging extra for such a basic feature is a bit shameless in 2014?). The microfilter EE sent me appeared to be a dud (no dial tone on my phone once it was plugged in) - but as you might expect, I had half a dozen of them in my spares box anyway. Having plugged the supplied credentials in, the BrightBox sprang into life and provided me with an internet connection.

Speed tests show my line running at about 11Mbps down and 1Mbps up, which is about as good as it gets for ADSL. I suspect having a new-ish (7 year old), fully underground line helps here, and I also suspect that the mile or so of backhaul connecting my street cabinet to the exchange must be nearly new too. 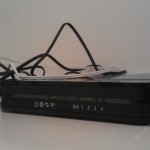 I gather that what I've been sent (see above) is the BrightBox 1 (Fibre customers seem to be getting the BrightBox 2 as standard issue). It works pretty well - the WiFi signal reaches all corners of my not very big flat. The web interface is basic, but all the functionality you need is there. You can even run multiple WiFi networks with different names off it (up to 3) - provided you understand terms like SSID, VLAN and DHCP, you can set up a properly separate guest network. For sure, a one-click option for this would be nice for the less technical user, but seeing this sort of feature at all in consumer grade kit is really nice, and I don't mind the technical terms.

After a couple of weeks, the connection seems fairly stable and reliable, and I've yet to see Netflix skip a beat (it takes a little while to buffer, but it's fine after that). Not a bad service at all, considering I'm spending more on a monthly basis on just about anything else.

I'll probably upgrade to some sort of fibre service after the 12 month deal ends, but hopefully by then the same price collapse will have spread there, particularly with the advent of non-engineer installs for such products.