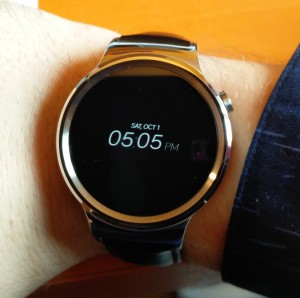 I have myself a Huawei Watch (W1). This is one of those areas of tech that I've been quietly sitting out, but having read a few reviews and seen a few friends finding them useful, I decided to have a go.

It's quite handy to have around. My phone (OnePlus Two), like most modern smartphones, is quite a large object, and not one which I carry around the flat with me at home. I also prefer to leave it on my desk at work when in meetings elsewhere on the same floor. All of which means that reminders for my next calendar event, texts, notification and incoming calls often go unnoticed.

The watch fixes all that (as long as I'm within bluetooth range of the phone), and is a nice discrete means of picking up on the important stuff. You can see the caller ID and answer calls using the watch, but you still need your phone to talk into and hear the caller out of. It'd work really nicely with a headset, though, and means you don't need to dig the phone out of your pocket to hang up on an unimportant call.

The watch also does voice-activated stuff, triggered by the "OK Google" magic phrase. Simple things like creating reminders or sending a text can be done all on the watch - it's really nice to be able to shout "OK Google, text Bob Smith saying I'll be there in five minutes" when stuck in traffic, without taking your hands off the wheel or doing anything illegal (driving without due care still applies, of course).

More complicated actions (like a Google search) open the relevant app on the phone, but it can still be a timesaver.

I've bought the Pujie Black watch face for it, which allows lots of customization and means I can see a nice visualisation of the day's calendar and instantly check how many events/meetings I have left today. It also shows both the phone and watch battery status.

It has all sorts of fitness and step tracking stuff which I've yet to really get to grips with.

Conveniently, the Saturday after I got it, I went to London and went out all night, finishing up with breakfast at midnight [not something I'd do every weekend, but it was kinda fun to do it once]. The watch still had 60% of its battery when I plugged it in to charge at 2AM after unplugging it at 8AM the previous day. And it's not as if it had had a light day: I'd been showing it off to people and playing with it for much of the time. So that's quite impressive and suggests it could go two light days without charging.

It's too soon to tell if the battery will wear out rapidly, but hopefully by the time it does, mobile phone repair shops will be able to swap it out using a soldering iron and a steady hand, much as they can for most phones with an "unreplaceable" battery.

Navigation isn't quite there yet: the screen is too small and the Google Maps app too immature to be useful, so I reverted to my phone. No doubt it will improve.

As with one's phone, it takes a couple of very carefully enunciated "OK Google"s before it picks you up. Unless you're describing the voice capabilities to a friend in a noisy pub, in which case it works perfectly and starts sending the text message you were using as an example.

As with the phone, all the speech processing is done in the cloud, so it stops working if your phone lacks a data connection.

The charging dock is proprietary (and at £29 for a spare, I'll have to remember to take it with me when I travel) - shame it couldn't be micro USB or USB C, but I can see it being aesthetically difficult to fit a port of any size into the watch. It has three discrete contacts on the back which line up with pins on the dock when it magnetically snaps in. The dock itself is USB powered, which fits nicely with the fact that I've replaced lots of double socket face plates in my flat with USB charging ones.

It requires bluetooth on the phone to be always on, which inevitably affects battery life.

Overall, I'd say Android Wear is worth a punt, and this variant has the advantage of being a classy looking watch in its own right too.