My walking club makes use of some clever technology which at least one other group has asked us about, so I thought I'd write it up here...

We list all our upcoming walks on our website, and there's usually one every week. We like to publish a mobile phone number for the walk leader so people can check the rendezvous and ask any questions. However, leaders are sometimes less than thrilled at the idea of having their mobile number on the internet. Our website had all sorts of hacks built into it - displaying the numbers as images and removing them after the event had passed - which were holding up our move to a more off-the-shelf CMS.

That's where I came in. The idea was to publish a single phone number for all walk leaders which forwards to the right person for the given week - no more privacy concerns and everybody happy.

This is not new; it's the sort of thing VOIP providers have been able to sell you for years on a "normal" geographic phone number like 01865 xxxxxx. However, publishing that on the website would cause all sorts of confusion; people most often call on the morning of the walk when we're already out on the ground, and would be put off calling a "landline" number because they'd think it was a home number.

For the calls, it's dead simple - just use a web page to specify the "target" number (or numbers plural if you're feeling adventurous): 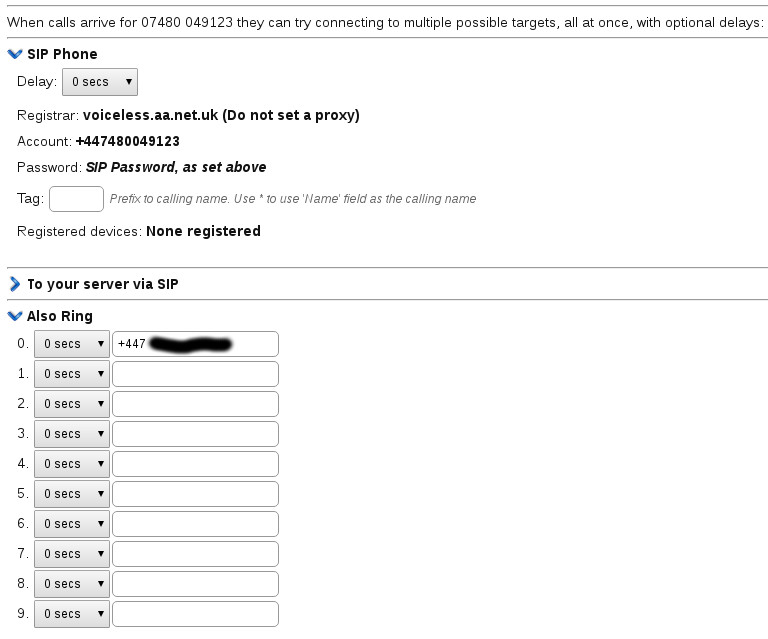 This works completely seamlessly and even passes through the original caller's caller ID to the target phone. It costs £1.20 per month for the number plus a per-minute cost for forwarded calls, which is currently 3p per minute for UK mobiles. That makes it very cost-effective for a cash-strapped walking club - the whole thing costs us less than £30 per year.

We also make use of the "time profiles" feature to limit calls to 8am through 8pm after an incident where someone called unreasonably late.

Texts are a bit messier (although in practice we find people rarely use them). But it's an 07 number and people expect to be able to SMS it, so we made it work. Unfortunately you can't seamlessly forward texts (because AAISP don't want to allow "forgery" of texts "from" the original sender, which I can understand). One option is to e-mail them somewhere, but the method we use is to have them sent to an HTTPS page which I host, which in turn uses IntelliSMS to send a text a bit like this: 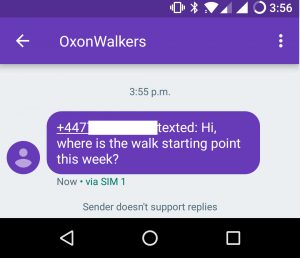 Clicking the sender number on most phones allows the reply text to be started pretty easily.