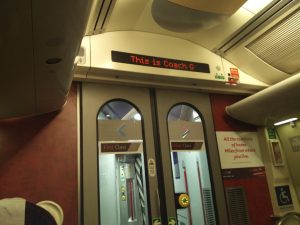 So I'm catching the train south from Macclesfield to Oxford - something I've done plenty of times over the past eleven years. I don't usually go for the last direct train of the day, but on this occasion, I did. 1949 out of Macclesfield, 2215 into Oxford. It's direct, which is important when you're lugging a large suitcase and some Christmas presents.

Things did not start well at Macclesfield, with the train arriving fully 45 minutes late and listed as going to Birmingham New Street. Unfortunately I have an 8AM Tesco delivery arriving at North HQ tomorrow, so giving up and trying again in the morning wasn't something I wanted to do. So I dig into the National Rail app and discover I can still make it to Oxford by walking from Birmingham New Street to Moor Street, taking a local stopping train to Banbury, waiting for half an hour, and taking a local stopping train to Oxford - arriving at 0015. Properly tedious, but I do need to get home tonight, so I dig out a mince pie and prepare for the worst.

Sure enough, we get to Birmingham, the train terminates and they tell us all to get off. But on getting off, the signs on the platform make it look like the front half of our train is continuing to Reading (like it should have done all along). So I get on, sit in an empty first class carriage, and watch the signs on the platform switch from "expected now" to "delayed" and then the train moves off...

Panic. Am I about to end up in a depot somewhere in the Midlands, trapped on a train all night?

Moments later, the driver confirms we're off to Reading as expected, and will make Oxford a mere 45 minutes behind schedule (time to re-arrange my taxi for the second time, sigh).

Why they couldn't have communicated the train's ultimate destination properly from the start, I have no idea. I was half minded to wait on the platform, in which case I could still be there, fuming that the train I wanted had gone without me because it wasn't labelled properly.

Nought out of ten for communication, seven out of ten for still managing to get the train through the same night, and one compensation request coming up...

Update: I filed my compensation request from the train, using its own WiFi. Southern (who I bought the tickets via) do have a nice online process including uploading photos of the tickets, but why do I have to take any action? Given we have a national database of what trains were or were not on time, the statutory compensation ought to be refunded via the same means I bought the tickets through, automatically and without me having to do anything. I feel a letter to my MP coming on.