Five years ago (!), we upgraded the AV systems at the church. One of the key changes made back then was to place the cabinet with the equipment in it at the back of the church, rather than the front - meaning it became possible to discreetly tweak the level on the microphones during a service.

However, that meant someone sat next to the cabinet, bending down to fiddle with the sliders on the preamp/mixer:

This is pretty standard kit and should be familiar to anyone who has worked with the microphones in a basic set-up like ours. Reading from left to right, you have a bunch of channels, each with a volume slider, and each plugged in to a microphone. In our case, that'd be two static, hard-wired microphones ("Pulpit" and "Lectern") and a bunch of radio microphones (Lapel 1-3 and HandHeld). It also has a 3.5mm lead for plugging in MP3 players or phones, and a CD player hooked up too.

This is all very well, and a quantum leap over the 1960s technology it replaced, but it was really starting to grate to have to sit at the back and faff with the sliders to adjust during a service - and lowering a too-high mic which started to feed back when someone walked around with it required a dash to the back and unlocking the cabinet, while everyone enjoyed the ear-splitting whistling sound.

Someone suggested that it ought to be possible to replace the unit above with one which could be controlled from an app on a tablet or phone - thus allowing the sucker in charge of sound (that'd be me) to sit in a chair at the front with the rest of the congregation, and tweak as required.

A bit of googling led me to the Behringer X-Air XR16, which does exactly this sort of job. We bagged ours from Bax Music for £254, which seemed pretty reasonable when you consider it should be able to replace the Inter-M unit pictured above which still retails for nearly twice as much. 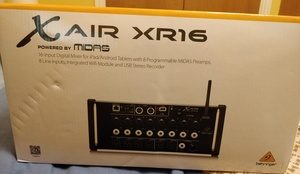 I mounted it in our rack inside the cabinet - the rubber sides unscrew to leave room to attach the supplied rack-mount "ears". Since there wouldn't be room to close the rack door if all the cables went in the front of this unit, I mounted it "backwards" with a blank metal plate facing outwards. But why not? There are no controls to be fiddled with on the unit itself; it's all about the app. 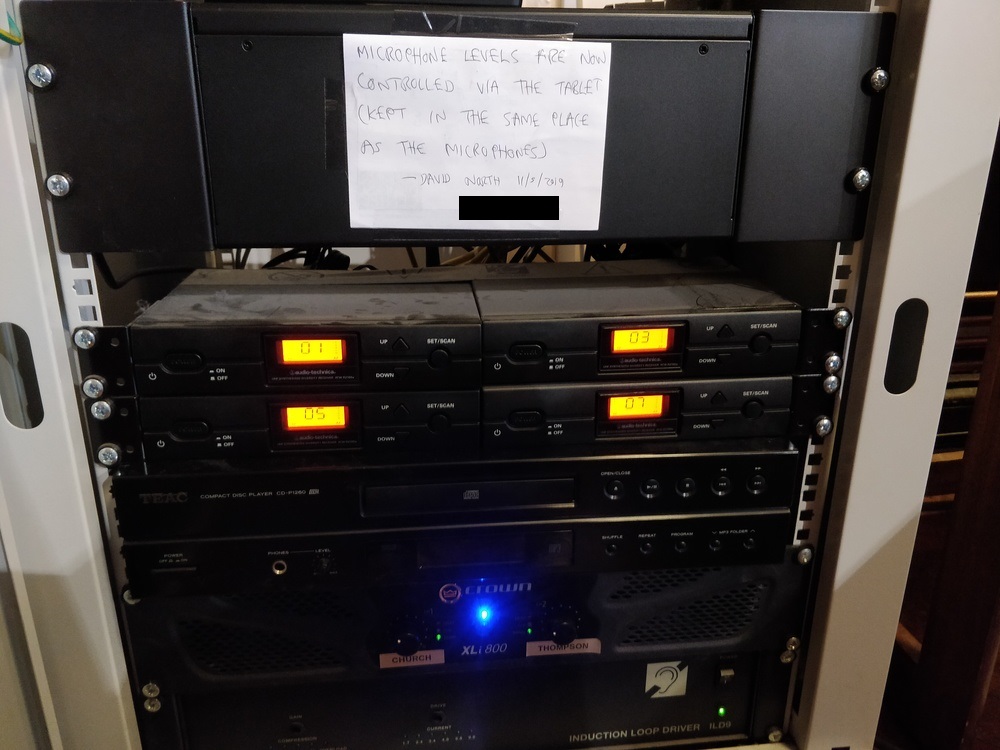 Plugging everything in was straightforward, though I did need a couple of extra cables - a 3.5mm to 6.3mm lead to take over the input from phones/MP3 players, and an extra lead to patch in our hearing loop amplifier to one of the auxilliary outputs. These were easy to find online.

A couple of things which weren't apparent to me before ordering the mixer, but worked out for the best:

So, we need a tablet

I ordered a Samsung Galaxy Tab A (10.1, 32GB, Wi-Fi) as the Android tablet to run the control app. Not much to say about that - it works, it was reasonably priced, it feels quite high quality for what it cost.

In order to set the mixer up, you have to power it on, then connect it to your network. You can plug in an ethernet cable if you happen to have one within reach. Alternatively, slide the switch on the unit to the right hand positon, "access point", then connect your table to the WiFi network it creates. You need to have installed the free X-Air app before doing that.

Long-term, I'd recommend either using an ethernet cable if one will reach, or setting it to wifi client mode. When acting as an access point, it secures the network with WEP, which is an old and broken standard, so not much security at all. It can however join a pre-existing network with modern WPA security. If you do that, though, make sure you are happy that anyone on the WiFi with the correct app will be able to control the mixer.

X-Air seems reasonably nice. There's quite a lot of capability in there, so budget for some time experimenting. Although you definitely need a decent sized tablet to drive it with confidence, the interface is as usuable as the space allows if you fire it up on a mobile phone: 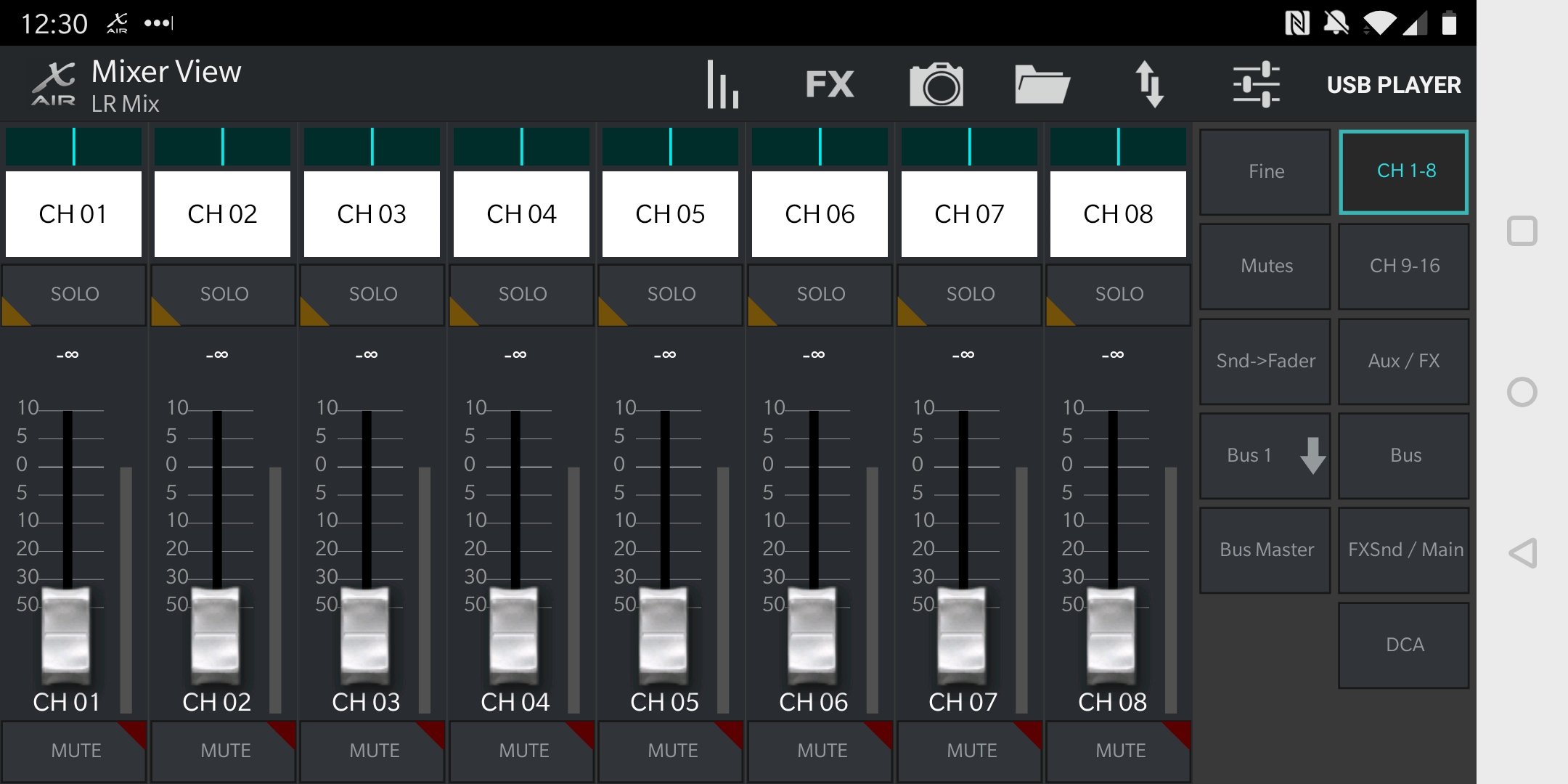 You can tap on the "CH01" labels in the app and then tap "CH01" again to reach a screen where you get to set the labels for all the channels. At this point, you either need to have been clever enough to transfer your microphone leads in a known order from your old kit to new, or work it out by trial and error (and move the leads around when they're not in the order you want).

Phantom power is a fancy name for the preamp/mixer supplying electricial current to power certain microphones as well as receiving signals back from them. In our case, this applies to the static, hard-wired microphones. On the old amp, sending power down some of the microphone ports was controlled by physical switches on the back of the unit: 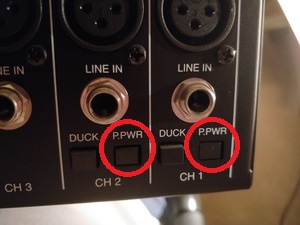 In the new world, this is of course part of the app. You get to it by tapping on the channel name and then pressing and holding the "48V" button. It's a nice touch that the app tries to make it hard to turn this on by accident, as sending phantom power down the line to kit which isn't expecting it might cause damage.

I found that even with the volume sliders for them all the way up, none of my microphone inputs were "loud enough". Don't try to compensate for this by turning the master output volume up too high, or turning your amp driving your speakers up too high - you'll get a lot of annoying background hiss.

After some trial and error, I found that the "gain" setting was the one to fix this. It's a control on the screen accessed by tapping the name of the channel once. In the case of microphone inputs, the gain control cranks up the input from the microphone before it goes through the preamp, which is particularly useful for radio microphones which people can't or won't clip close enough to their throat (these things are, like so much in the world, designed to be easy for men to use).

Our first service on the new system went well - certainly well enough for me to list the old preamp on eBay. Highly recommended! Drop me an e-mail if you want to know more.

The ability to have the system record directly onto an inserted USB stick is not one I've explored, but could be really useful for the future.

Racking up and cabling in the new kit did cause me to slightly revise my good opinion of Expression Media, the original installers in our case. If I wanted eight UK power sockets available to my rack, I'd have tried a bit harder to find an eight-way lead/PDU rather than daisy-chaining two four-way extensions and using a two-way adapter to make up the eighth!