Long term readers will remember previous rants about the length of time it takes to get a phone line (and thus internet) installed after moving to a new address in the UK.

Of course, the last one of those was seven years ago, and since then, BT have seriously raised their game, meaning getting DSL working at my new house was a non-event, sorted within 2 working days of moving in.

What’s that? You don’t believe a word of it? You’re quite right.

How it should have gone

As mentioned, I had four weeks between exchanging on this house and completing, so naturally I ordered broadband for the first full working day after moving in.

The previous owners were on Virgin Media. I’m not a fan, especially since they did a less than perfect job of digging up my street back in Abingdon.

So I ordered service from my ISP of choice, who, like most, have to subcontract the actual running of cables to the premises to BT Openreach.

Of course, being built in 1968 before the advent of cable services, this house must have had a phone line from BT (or rather, the Post Office before the telecoms bit was privatized), so simply reconnect that and job done.

How it actually went

Within a few hours of moving in, I established that there was no sign of BT sockets or cabling, either inside the house or out.

Having talked to the neighbours with an identical house, their BT line emerges in the cupboard under the stairs. My house doesn’t have a cupboard there, it having been opened up by the previous owners in their penchant for open-plan living. And, I suspect, some bright spark either chopped the phone line off or dropped it underneath the floorboards, never to be seen again. “You’re not using this, right? It looks untidy, so I’ll just…”

I warned my ISP of this and was assured Openreach would know what to do.

Contractor #1 gave me his comiserations and explained that as a subcontractor, he wasn’t allowed to touch most of BT’s equipment, so tracing the misssing line was out of the question.

The install was rescheduled for two days later, and I waited in for five hours (working from home on a wobbly 4G backup link) before being told it had been rescheduled for a week on Monday (engineer #2 clearly liked the look of it even less than #1).

Today, over a fortnight after moving in, engineer #3 didn’t like the look of it much either - but at least as a proper Openreach employee, he could and did call in for some backup. The team to dig up the missing underground cable could have taken another week to arrange, but fortunately there were some telegraph poles available, so in a rather retro experience, they ran a brand new overhead copper phone line into my garage, and at last the job is done: 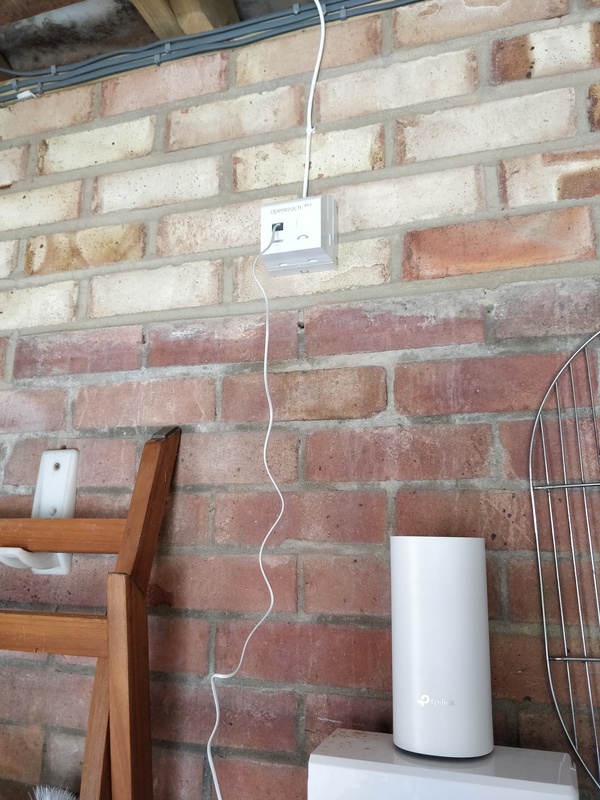 A huge faff, but much better than giving money to Virgin Media after what they did to our lovely block paved road in Abingdon.

I feel like there’s a worrying trend in some parts of the IT industry which needs to be called out.

Checking in on church hall invoicing

Back in 2019, I wrote about my home-brew invoicing system for the church hall.