What we have here are some Nanoleaf Light Panels: 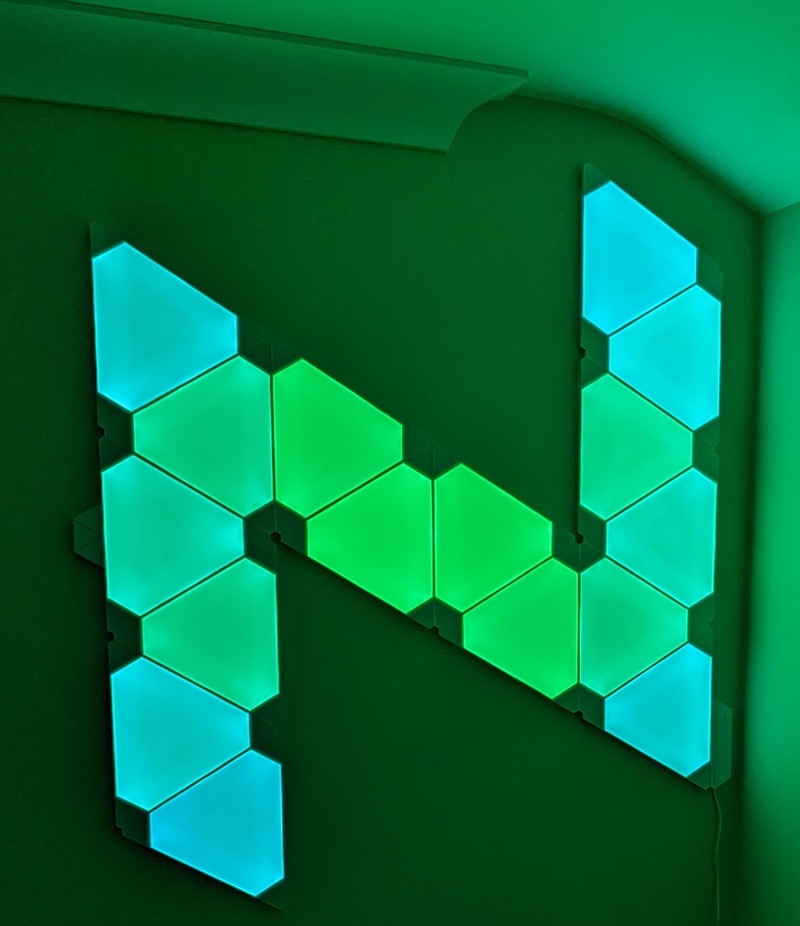 Perhaps the hastily snapped pic doesn’t do them justice, but they look nice on the wall behind where my webcam points when I’m sat at my desk. They can be set to change colour or emit a steady light according to taste.

It’s important to note at this stage that they are … reassuringly expensive. I managed to bag this set on eBay for about two thirds of what they cost new. Still stings a bit, but a nice decorative feature. For the record, that’s a letter N and not (as one colleague suggested) a sideways Z as a tribute to a certain unpopular global leader and his ill-thought-out war (!).

Fast forward ten months, and Nanoleaf turned out to be doing a sale on some of their other panels. In particular, the Hexagons:

These do look rather swish on the wall in my dining room. Again, the fact that they can sell them for 40% off gives you some idea of how healthy the margin on them must be, but once again they’re something different and pretty to have on the wall.

Those with an eye for detail will note that I didn’t pay attention to the grain when putting these up, but the bits which stick to the wall are rotatable mounts, so with a bit of care and attention I should be able to reorient them all without pulling the sticky pads off the wall.

What else? Both sets are controlled from an app and have Alexa integration which works nicely. I suspect anyone cool and beautiful enough to own things like these is expected to have an iPhone, because the Android app has an annoying glitch - it claims it can’t reach the panels if you re-open it after a while, but a force close and reopen makes it realize it can.

Both the light panels and the hexagons can pulse in time to music playing in the same space as them - a popular use of both is as background for streamers - but I’m content to pick from the array of “scenes” in the app for various effects.

Both sets clip together with connecting pieces, so you can make any arrangement you like as long as each panel has a minimum of one edge in common with an adjacent one. There’s a handy mode in the app for experimenting with layouts.

Finally, a laser level and a tripod make the business of getting these things dead straight and level much easier: 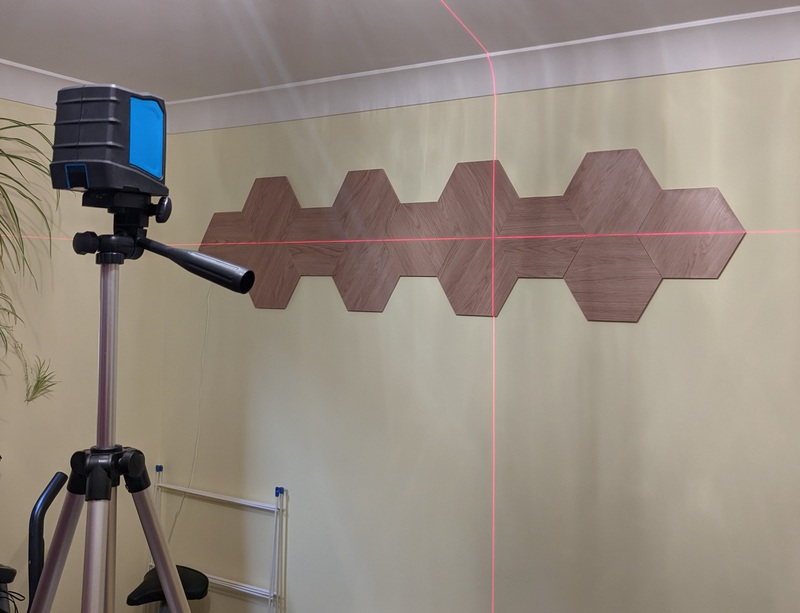 As you can see, my attempts at late night mental arithmetic were a bit off and they aren’t (as intended) central between the door and the wall - but I’m not sure it matters enough to revisit, they’re a talking point either way.

Once I’m definitely happy with the arrangement, I might drill a hole behind the panel which has the incoming power connected, and run it from a socket on the other side of the wall to give a wire-free finish.